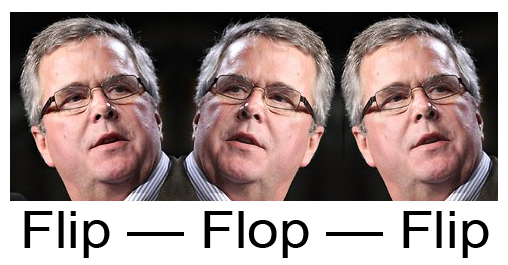 The Mighty Jeb Bush Comes Down to Earth [National Journal] “His waffling and word-mincing on immigration has stunned reformers, frustrated friends, and left Democrats relishing the public-relations disaster. “@JebBush a flip-flop-flip on immigration? Wow,” said Democratic National Party Chairman Debbie Wasserman Schultz of Florida on Twitter. “I fashioned you more of a baseball player than a gymnast. My bad.”

Gov. Scott Boasts Improving State of Affairs, Democrats Decry ‘State of Denial’ [Palm Beach Post] “Gov. Rick Scott will kick off the 2013 legislative session today with his third State of the State speech, highlighting tax breaks for manufacturers and teacher bonuses and taking credit for a turnaround in Florida’s economy. But, in a prebuttal to what they called Scott’s ‘State of Denial’ joint address to lawmakers, Democrats on Monday blasted the governor as an untrustworthy politician bent on re-election and avoiding blame for the state’s continuing woes…Democratic legislators, joined by Florida Democratic Party Chairwoman Allison Tant, scoffed at his education proposal, calling it a ‘political ploy.'” 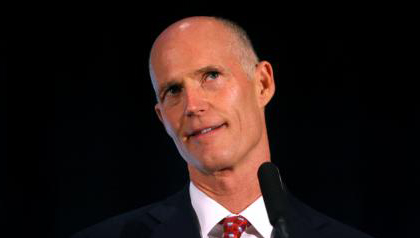 FDP Doesn’t Think Gov. Scott’s New Focus On Families is “Genuine” [Orlando Sentinel] “Gov. Rick Scott is failing at his promises to create jobs and does not have a history of focusing on families like he now says is his priority. Or at least, that is what the Florida Democratic Party is outraged about. Scott touting his ‘Florida Families First’ budget throughout the state has not been enough to convince FDP Chairwoman Allison Tant that he really cares about families and their needs. ‘So thanks governor, in your new found interest in Florida’s families. But it is not genuine and we are not going to forget,’ Tant said.”

Gov. Rick Scott’s State of the State a pivotal moment for him, Florida [Tampa Bay Times] “Democrats didn’t wait to hear Scott’s speech before criticizing his record Monday, especially on education, and two of their chief critics are teachers: Sen. Dwight Bullard, D-Miami, and Rep. Karen Castor Dentel, D-Orlando. ‘We know his record,’ Castor Dentel said. “If he wants to create jobs and improve Florida’s economy he must start by properly funding our schools instead of giving tax breaks to Florida’s corporations at the expense of Florida’s students.'”

‘NO FACTS, NO LOGIC, NO REALITY’ IN WEATHERFORD’S MEDICAID POSITION

Editorial: John Romano: No facts, no logic, no reality in Will Weatherford’s Medicaid stance [Tampa Bay Times] “I think Will Weatherford’s heart was in the right place. It was his facts, theories, justifications and conclusions that seemed to wander off aimlessly. The state House speaker’s rationale for rejecting Medicaid expansion on Tuesday was not just debatable, it was nonsensical. Seriously, what was he trying to say? He provided zero facts. Zero alternatives. Zero acknowledgement that Florida hospitals were on the hook for $2.8 billion in uncompensated care last year. He cited no studies, passed off theories as reality, and failed to offer even a glimmer of hope for a state that has one of the highest ratios of uninsured citizens in the nation. His overriding concern — that government health costs are already out of control — is certainly legitimate and worthy of discussion. But you cannot enter that discussion without conceding the current system is also too costly, inefficient and illogical.”

Editorial: On Medicaid, family facts and fantasies [Tampa Bay Times] “Let’s get this straight. House Speaker Will Weatherford opposes accepting billions in federal dollars to expand Medicaid and recalls that his family relied on a safety net to pay hospital bills for his brother — and that safety net turned out to be Medicaid. This is hypocritical at best, and Floridians expect more truthfulness and compassion from their elected leaders.”

Weatherford’s Dad Proven Right That Medicaid Covered Medical Bills [Tampa Bay Times] “[…]Weatherford told House members on Tuesday that he opposed the expansion because it crossed the line of “proper government.” He shared an emotional story about his brother Peter, who died at 20-months in 1995 when he was 15. His medical care was too expensive for his family to afford, but a “safety net” helped out, he said. Weatherford, however, didn’t describe what that safety net was…Asked by reporters on Tuesday if Medicaid paid the bills, Weatherford said that it had not. When told that his father had said they were covered by Medicaid, Weatherford said he would learn more. A day later, Weatherford said his research showed that medical care was paid for by the Medically Needy Program, which does get paid for with Medicaid dollars.”

Weatherford Says His Family Was Helped by Medicaid, But He’s Still Against Expanding It [Florida Times Union]

SEN DEMOCRATS DRAW LINE IN THE SAND ON ELECTIONS REFORMS

Senate Democrats Name Non-Negotiable Election Reforms [WFSU] “As Florida lawmakers tackle election reform, Senate Democrats are demanding changes they say are needed to get their support. Democrats want to reverse controversial election reforms Gov. Rick Scott signed into law before the last election. Democrats want early voting restored to a mandatory 14 days, up from the current 8 days, and to make the last Sunday before the election a mandatory early-voting day. And Senator Darren Soto, of Orlando says, there should be more early voting sites. ‘The 2012 election here in Florida was a national embarrassment. I saw four-to-five-hour lines, folks snaking around the libraries and a handful of other early-voting locations, and out into the street. And it could have been avoided.'”

Senate Democrats Unleash Elections Wish-list [Palm Beach Post] “Florida Senate Democrats released a 7-point plan to fix the state’s elections, going much farther than what GOP leaders in both chambers appear to be prepared to accept. The Democrats’ plan would not only repeal HB 1355, the 2011 law that shrank early voting from 14 to eight days, which critics say was a major factor in long lines and waits up to eight hours encountered by some voters last fall. The Democrats’ plan would require 14 days of early voting in statewide or presidential elections, including the last Sunday before Election Day, known as “Souls to the Polls”; one early voting site for each 47,000 registered voters; more flexibility in early voting sites; and allowing voters who move to cast regular ballots instead of provisional ballots at the polls. They also want voters to be able to cast their absentee ballots in person at elections offices as soon as they receive the ballots in the mail.”