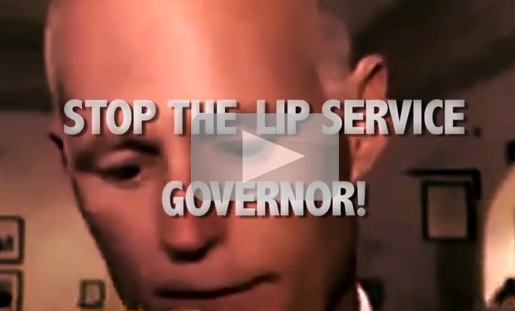 Rick Scott Hit In Florida Democrats’ Web Ad For Long Voting Lines (VIDEO) [Huffington Post] “Florida Democrats released a web ad on Thursday linking Gov. Rick Scott (R-Fla.) to the long voting lines encountered by voters in the state in 2012. In the video, Scott is seen avoiding the question of whether he should have extended early voting hours. The video goes on to show the long lines outside voting stations, with one woman claiming she waited seven hours in order to vote. The video ends with Scott echoing that he is ‘confident the right thing happened.'”

Editorial by HHS Secretary Kathleen Sebelius: After Three Years, Healthcare Reform is Closing the Gap [Miami Herald Op-Ed] “This week marks the third anniversary of the Affordable Care Act. For Floridians, that means a healthcare system that is stronger than it was three years ago — and a future that looks even brighter. Floridians who have health insurance now have more security thanks to new insurance-market reforms and consumer protections put into place by the law. Preventive services like mammograms and flu shots are newly available for free to 3.8 million people with private insurance plans. About 237,345 Florida Medicare beneficiaries with the highest prescription drug costs have saved an average of $678 on their medications. And Floridians are now protected from some of the worst insurance-industry abuses such as lifetime coverage caps that could cut off benefits when people need them most…The healthcare law is benefitting Floridians by providing more security for those with coverage, better options for those without it, and more affordable care for everyone. More work remains to be done, but we are moving in the right direction.”

Democrats Lose Enthusiasm for Weatherford’s Campaign Finance Overhaul [Miami Herald] “Along mostly party lines, the House on Thursday rejected efforts by Democrats to limit campaign contributions to $500, prohibit the governor from raising campaign cash during the legislative session, and prevent candidates from hoarding up to $50,000 in campaign cash to use in their next political races. ‘I was disappointed we didn’t get support,’ said Rep. Allan Williams, D-Tallahassee. ‘They weren’t partisan amendments. They were good government amendments.’…Rep. David Richardson, D-Miami Beach, in asking whether rolling over $50,000 to a future campaign gave incumbents an advantage, offered up a horse race analogy. When he asked if a horse race would be fair if one horse had a headstart of 50,000 paces, [Rep. Rob] Schenck replied that his bill makes no mention of horses. With little discussion, Republicans rejected an amendment by Williams that would prohibit the governor from raising campaign cash during the legislative session. The prohibition was a good one, Williams said, because it would put the governor on equal footing with lawmakers, who don’t raise money during session.”

Florida Poly Future Unclear, Weatherford Says [Tampa Bay Times] “So perhaps JD Alexander should be worried that his dream of a 12th university in Polk County will get dashed. A day after the Florida Senate excised the $22 million for the yet-to-be-built Florida Polytechnic from its education budget, House Speaker Will Weatherford said he’s open to reevaluating whether it belongs in the state university system. ‘We do have the responsibility to make the best lemonade that we possibly can out of the situation and hopefully turn that into a world-class institution,’ Weatherford told reporters Thursday. ‘The Board of Governors (which oversees the university system) and the Board of Trustees should get creative about what that institution could be.’ Asked if that meant not turning it into the state’s 12th university, Weatherford replied: ‘Yes.'”

Poll: 74% of Fla GOPers Back Gay Marriage or Civil Unions [Tampa Bay Times] “It was barely four years ago that nearly 62 percent of Florida voters passed a state constitutional ban on same-sex marriage and civil unions. The Florida GOP, at the direction of then-Senate president and CFO candidate Tom Lee, pumped $300,000 into the effort in 2006 and 2008. It’s hard to see how that amendment could pass today. A March 15-18 automated poll by the Democratic firm Public Policy Polling found 75 percent of Florida voters favor allowing gay couples to legally marry (38 percent favored) or be allowed to form civil unions (37 percent supported). Only 23 percent said there should be no legal recognition of a gay couple’s relationship. Among Republicans just 25 percent opposed legal recognition of a gay relationship, while 53 percent support civil unions and 21 percent would legalize gay marriage.”

INSTEAD OF FOCUSING ON JOBS, GOP LEGISALTES PARANOIA

Bill Against Shariah Law in Courts Passes Panel [AP] “After it failed last year, lawmakers on Thursday revived a bill that would ban Shariah, or Islamic, law and other foreign laws from Florida courts. Republican Sen. Alan Hays, who sponsored the bill, said his measure was a ‘preemptive gesture.’ There are no reported cases in which a Florida court applied foreign law. The Senate’s Governmental Oversight and Accountability committee cleared the bill (SB 58) by a party-line vote of 6-3. A bill last year passed the House but never was called for a vote before the Senate. Hays’ ‘motives and intentions are good, but it’s a bad idea,’ said Sen. Chris Smith, a Fort Lauderdale Democrat. ‘It’s just not needed…It’s not going to become an issue because we have a great legal system. And it could open us up to more litigation.’ The Florida Bar’s Family Law section opposed the measure, saying it would create confusion and uncertainty.”