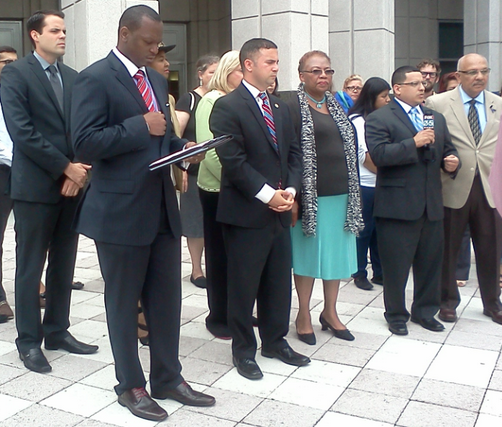 Orlando, FL — Today, Democratic legislators and concerned residents held a press conference about Gov. Rick Scott’s veto of HB 235, which would have allowed legal immigrants with deferred action status and with no criminal history to obtain a driver’s license. The legislation was approved by the Republican-controlled legislature 115-2 in the Florida House and unanimously in the Senate.

“The Dream Act driver’s license bill passed with overwhelming bipartisan support. It passed because we as a legislature understand these young Floridians receiving deferred action require a driver’s license to pursue the American Dream.  Scott’s veto yesterday flew in the face of this fundamental belief, and has effectively denied this opportunity for thousands of young Hispanics, Haitians, and other immigrants legally here in our Great State”, said Senator Soto.

“This bill would have helped the diverse communities of Central Florida. The Governor missed an opportunity to embrace the Floridians of today,” said Senator Geraldine Thompson (D-Orlando).

“The deferred action program is about bringing our dreamers out of the shadows so that they can participate in and make greater contributions to our community. Now dreamers in Florida with no criminal history will have work permits but won’t be able to drive to school or to work – that is nonsense. Today our governor showed us that he lacks the courage to confront the most extreme elements in his party, the same elements that have held up immigration reform at the national level,” said Representative Jose Javier Rodriguez (D-Miami).

“I am very disappointed in the Governor’s decision. This is just another example of the Governor being out-of-touch with the needs and desires of our community,” said Representative Victor Torres (D-Orlando).