Big Talk About Education — And Big Cuts for Schools

Tallahassee, FL — Rick Scott’s playing a game with Florida voters — the kind of game they can only lose. For two years he cut hundreds of millions from public schools and colleges, while cutting scholarships and raising tuition by double digits. But now that voters are about to hold him accountable, he’s hiding his real agenda and talking big talk about education — but it’s just a shell game. 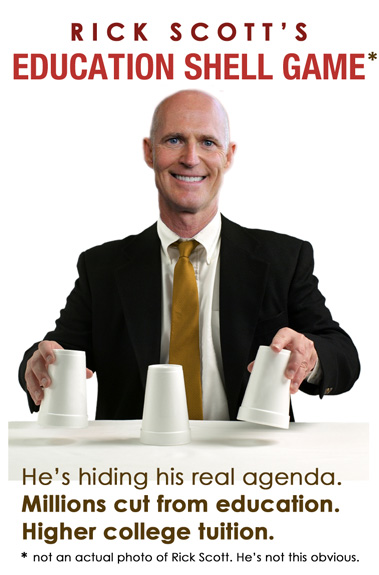 See What’s Under the Cups:

Scott Cut $1.3 Billion from Education, $300 Million from Universities.
There were “$1.3 billion in cuts the Republican Legislature and Scott passed in 2011. (As a matter of fact, Scott originally proposed even larger cuts but was rebuked by Republican lawmakers who found the size of the cuts untenable.)” [PolitiFact Florida, 4/18/12]

In 2012, “system-wide, universities this year absorbed a $300 million cut in the budget approved by state lawmakers and signed by Gov. Rick Scott.” [Miami Herald, 6/21/12]

Rick Scott Approved Hiking Tuition 13%.
“While Scott proudly vetoed a 3 percent tuition hike last month, his 2011 budget included an 8 percent hike for students, at a cost of roughly $50 million. Scott also approved a 5 percent tuition increase for state colleges in 2012, saying that “colleges remain best positioned to weigh the needs of their institutions against the burden of increased student costs.” [Tampa Bay Times, 5/31/13]