The flyer, which will be distributed by the FDP this week at senior centers and 55+ communities throughout Florida’s 13th Congressional District, details lobbyist Jolly’s record on issues that matter to Pinellas seniors – lobbying for an extreme group that supports privatizing Social Security, and his comments in support of the Ryan budget that ends Medicare as we know it.

“Pinellas seniors just can’t trust Washington lobbyist David Jolly,” said Florida Democratic Party spokesman Joshua Karp. “Jolly praised the radical Ryan Budget that ends Medicare as we know it. He even lobbied for an extreme group that supports privatizing Social Security. Lobbyist Jolly would address our budget challenges by making seniors pay more, instead of closing tax loopholes for his corporate clients and the wealthiest few. In Congress, an untrustworthy lobbyist like David Jolly would do what lobbyists always do in Washington – put special interests over Pinellas seniors and make the dysfunction even worse.” 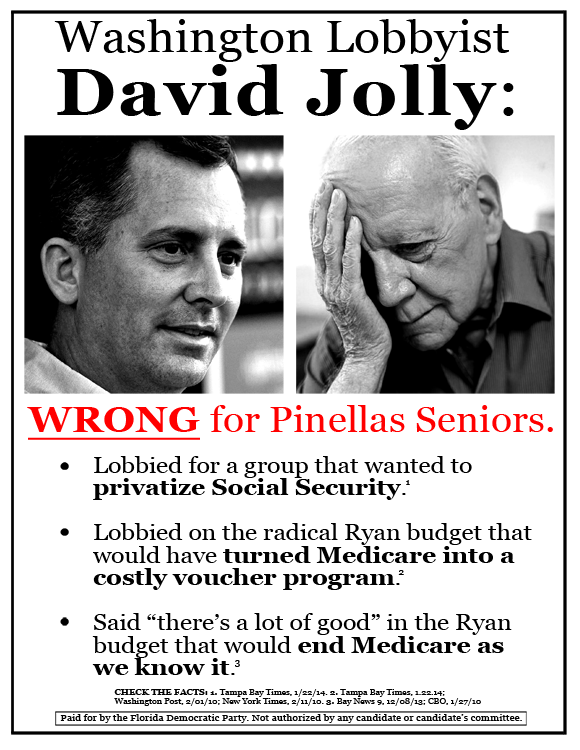 Jolly Lobbied Paul Ryan on Ryan Budget in Fall 2009. In December 2009, Jolly reported lobbying on Social Security Reform for Free Enterprise Nation effective November 2009. Jolly’s campaign spokesperson said: “As we have explained before, if an issue came up during a meeting, David disclosed the topic…In this instance, he was meeting with Paul Ryan on the Ryan budget and the topic of Social Security came up.” [Tampa Bay Times,1/22/14; Jolly 2009 LD-1 Disclosure Form]

Months Later, Ryan Offered a Budget Turned Medicare into a Voucher Program with Slower Rate of Growth than Healthcare Costs.  A Washington Post columnist reported: “To move us to surpluses, Ryan’s budget proposes reforms that are nothing short of violent. Medicare is privatized. Seniors get a voucher to buy private insurance, and the voucher’s growth is far slower than the expected growth of health-care costs.” [Washington Post,2/01/10]